Today was the day! We launched the first High Hopes Project balloon today at Cottonwood School in Fernley, Nevada. Today’s launch was planned as a way to test the designs for the science and engineering payloads elementary, middle school and high school students have completed. University of Nevada, Reno, mechanical engineering students were on hand to launch the balloon, so it was a real K-18 collaborative event (some of the UNR students are grad students). Here’s a link to a Flickr set of photos.

Unfortunately, although the weather cooperated in easing up on the rain that has been falling, and the wind cooperated fully … nary a gust, the prevailing wind flow aloft was predicted to either land the balloon in Pyramid Lake or in the tall mountains east and west of it. The numerous predictions displayed in blue reflect different sizes of balloons and parachutes, as well as different amounts of hydrogen … nothing was making a big enough change to land the balloon anywhere outside the 5 mile clearance preferred. 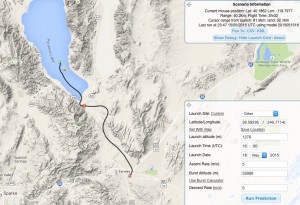 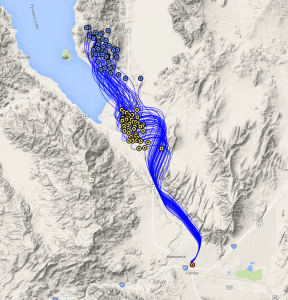 Therefore, after much angst over not being able to include the student payloads, cameras and communications equipment in the flight, lest they be lost in the lake, it was decided to go ahead and do a strictly “High Hopes” launch. Because of schedules there just wasn’t a possible make-up day on our calendar so it was today or nothing. So we loaded, or I should say Ms. Adkins, 3rd grade teacher, whose students have designed paper to flutter to the ground as slowly as possible (they tested the designs for weeks) loaded the balloon before it was inflated with hundreds of High Hopes from around the world (and you can still submit them for next Tuesday’s planned launch at Lake Tahoe). 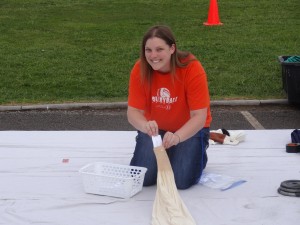 In the meantime the UNR engineering students, some learning to launch for the first time, jumped into action to inflate and launch the balloon. 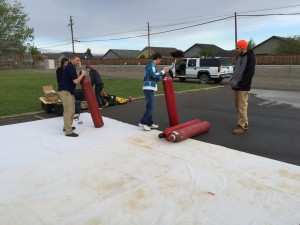 They unloaded their equipment and donned their special suits to protect them and ground them during inflation. Hydrogen was used as the lighter than air gas because it is about 1/10th the cost of helium (which is mined and is in short supply). Hydrogen has the potential to flare if ignited by a spark (hence the suits used to ground them to eliminate the chance of static electricity sparking). They have run tests in the desert where they have set up cardboard “people” and thermometers to gauge the danger if the balloon was to explode during inflation, and what they have found is it doesn’t really explode, it flares straight up. None of their cardboard “people” have been damaged and the thermometers hardly registered a temperature change. 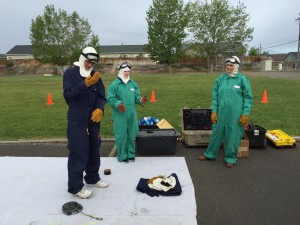 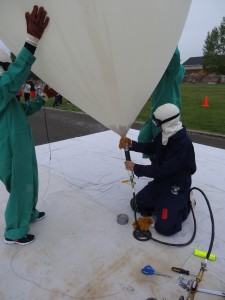 Note the ground wires running to their suits during inflation.

Students were kept back, but were able to observe. Note the “High Hopes” in the neck of the balloon – they were released when the balloon burst to spread the world’s high hopes. It was decided to under inflate the balloon … just enough to get it slowly airborne, but little enough to get it as high as possible, and to travel as far as possible to clear the lake. Yes, less gas means higher altitude and longer flight since the balloon has more space to expand, it rises more slowly so the trip takes longer (prediction was 2.5 hours) and the lake would be cleared.

Once the balloon was inflated and the 500+ students were assembled on the field, a lucky 3rd grade student was chosen to release the balloon after the requisite countdown from 10 … 9 … 8… 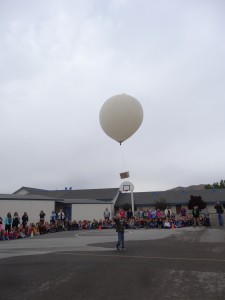 Interestingly, the weight of the high hopes in the balloon shifted during takeoff and the balloon rose into the sky on it’s side. 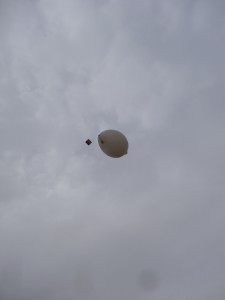 Students cheered and pointed into the sky for a good 10 minutes. Next the engineering students answered questions about everything from why hydrogen was chosen and why they felt it was safe because of the precautions and equipment they used, to how high the balloon would travel, to why the balloon would expand during its journey until it burst. Would it really be larger than their classroom when it burst? (yes) 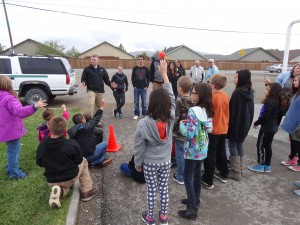 The questions were excellent, and they wowed the university students with their insights into the physics and dynamics of lighter than air craft. A great learning experience for all.