After so many delays and scrubbed launches the High Hopes Project balloon successfully launched at (and in) Lake Tahoe on Wednesday, June 3, 2015, at about 8:40 AM from DL Bliss State Park in California. 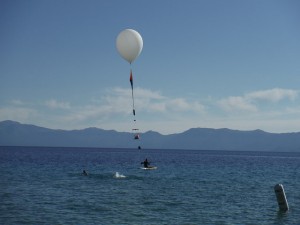 The balloon payloads included 5 GoPro cameras (3 shooting video and 2 shooting stills), a student designed payload that contained a reel system that would reel the 2 GoPros dropped 50 feet deep in the lake back up to the bottom payload (the initial plan was 150 feet, the reel would not hold that much line, so 50 feet was what the students settled on), a payload carrying the “High Hopes” of the world designed to release them when the balloon burst (that seemed to work fine, more on that later), a camera payload that included 3 GoPro cameras along with the solar panel experiment and a temperature data logger. Communications equipment used to track the progress of the balloon and pinpoint its location so we could find it was included, and of course a parachute to bring it down slowly once the balloon burst.

Above video: High Hopes Balloon being prepared for launch, paddled out to launching position on Lake Tahoe, the 2 GoPro cameras being dragged across the bottom of the lake, divers that helped with the launch, view from the down-looking camera from underwater, then scenes from progressively higher altitudes until the balloon bursts above 26,000 meters (86,000 feet). You can hear the burst and then see and hear the “chaos” afterwards as the payloads begin their rapid fall to Earth. You can seemingly glimpse the entire Earth at times because of the exaggerated wide angle of the GoPro camera.

Many more photos are available to see on out Flickr page of the launch. We plan to add more soon.

The balloon burst at a lower altitude than we expected. The computer prediction based on size of balloon, payload weight and gas volume was for 33,000 meters (100,000 feet) or higher. The actual burst was at about 26,385 meters (86,500 feet). We chased the balloon based on data we were receiving from 2 SPOT trackers (GPS) and a Ham radio set up that sends out altitude, speed and ascent angle information in 1 minute intervals.

From the time the balloon launched and we received a GPS coordinate from its landing spot it took us about 8 hours to retrieve it. Luckily we had an awesome 4 wheel drive truck at our disposal driven by Lou Loftin. The high desert roads we transversed were treacherous. We finally got to within a mile of its location only to be stymied by a barb wire fence and many “Keep Out!” and “No Trespassing!” signs. We found a gate in the fence that opened into a mine and wondered if we would be allowed in to continue our search. Soon the mine superintendent drove up in his truck. We explained what we were about and not only did he let us on the property, he acted as our guide. It took us more than 2 hours to finally locate the balloon from that point and he stayed with us the whole time. Turns out he was a graduate of Sparks High School, one of the local participating schools. We saw one rattlesnake along the way and climbed some sections of road that were so steep it seemed we might tip over, but finally the balloon (really the colorful parachute) was spotted about 800 feet below us. Doug Taylor climbed down to retrieve it and Lou helped him carry the payloads the last half of the way. All in all a real adventure in so many ways.

Unfortunately, school was soon to end and we got so busy doing our jobs this has been the first chance we’ve had to share the results. We’ll add more photos from the recovery and other aspects of the project as we have time.

Data: We recorded temperature using a data logger designed to record and track temperatures in Cryogenic freezers. The temperature at launch was 12.2C (54F) and the coldest temperature recorded was -38.8C (-37.84F). Anyone that would like all the temperature data can leave their email address in the comments and we will send them to you.

The solar panel experiment linked to above, also utilized a data logger designed to record fluctuations in voltage. The solar panel was rated for about 2.5 volts of power output. The balloon was launched from about 1890 meters (6,200 feet) at 8:40AM Pacific Daylight Time, burst around 10:28AM, and landed about 11:10AM. Here is the data from that datalogger. We will post more about the launch later. Please ask questions in the comments section of this blog post.

Note the negative number readings below were caused by reversing the wiring to the data logger. Just ignore the negative number sign. So the first recording at 8:40 AM means the solar panel was producing 2.317 volts. We highlighted the data reading from the burst time at 10:28. What do you notice?

Powered by WordPress | Hosted by Edublogs | Protected by CloudFlare